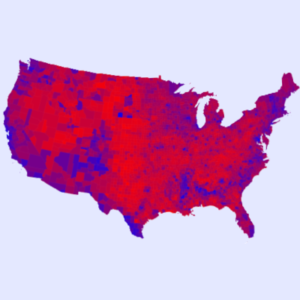 As an outspoken liberal white lesbian social worker from New York City, I’d think the majority of my readers would be of a similar demographic - and I’d be wrong.

My readership is comprised of all genders, races, sexual orientations, and political affiliations.

Which basically means that no matter how next week’s US election goes, many of us are going to be unhappy.

Moreover, we’re likely to find ourselves in relationships with people who are celebrating the outcome while we’re feeling a little dead inside.

For decades, the divide among the two political parties has been growing in America, but the gap today has most of us feeling like we’re in an existential crisis.

What makes the pain of this divide so unbearable is that we feel alone in our fear. Our loved ones don’t get it. They watch fake news (no matter the source), they’re being taken, they’re too worried or not worried enough. Mostly, they’re whatever we’re not.

Which makes us feel alone.

It’s this loneliness that I’m going to try and calm today. I want to help you build an internal bridge to others.  Because above all, America (and the world) needs to find a way to come together.

When you find yourself face to face with an other, follow these steps (in order) to create an internal shift so you can reconnect with those you love.

This is how you build empathy.

1. Ask for their personal story. We talk too much and listen too little. Myself included. Rather than jam our opinions down the throats of others, we need to slow down and try to understand. I don’t mean their political views - I mean the reasons for their views. Like, what in their life caused them to have their beliefs? What about their own personal story made them think the way they do. Drill down on their personal experiences that shaped their political views. Ask questions that will help you understand why they feel the way they feel.

2. Identify something reasonable about their story.  I don’t have to agree with your thinking to find something valid and logical about why you think the way you do.

Human beings want to feel understood by others. If they tell you they were raised by a single mother who worked three jobs to feed all 8 kids say, “I can see why you can’t imagine a scenario where someone should get an abortion.” <- and then shut up. Don’t dispute it.

3. Their story ties to their moral values. Oftentimes, just validating their experience will launch someone into telling you more about why they feel the way they feel. If it doesn’t, say, How did your experiences growing up inform your opinion on abortion?

4. Connect through your values. Humans all have the same basic values. We just express them differently.

This last step is an internal one. Don’t say it out loud because it'll seem like you’re trying to persuade the other to cross over to your side.

Internally, make a case for why you share the same value. Here’s how I’d make the case in this example:

Essentially, we’re both pro-life. And the way I express that value is by ensuring that once a person is born, they have access to the things that will ensure that they thrive in life.

See if that doesn’t soothe your soul just a little.

Prefer to Multitask? Listen Instead!

← Why do my partners keep trying to change me?I looked through my boyfriend’s phone and I can’t unsee what I saw →
×