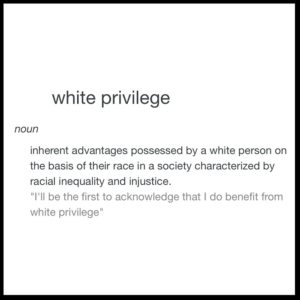 This fall, I took a course called Whiteness, Race, and Social Justice. I wanted someone to show me the things I can’t see in myself – all the ways I’ve been socialized and educated to participate in and perpetuate systemic racism.

I came to that class riddled with guilt over my white privilege. Drowning in it.

My non-white friends can tell you all about my white guilt – how quick I am to join in talks about racial oppression, to bemone the ways that the color of my skin makes my journey as an American unquantifiably easier than their’s, and to apologize to the point of undoubted annoyance.

Now, if the goal of white folks is to become woke, I’m basically still in bed knowing I should get up. It’s not that I’m hitting snooze. I just don’t exactly know how to move my legs. But I know I should.

I have just enough information to know that bad shit happens to people of color (POC) and that white people’s response to that bad shit – at least among liberals like me – hasn’t been great and tends to fall into a few categories:

That first category is painfully familiar to me. It hurt to even write it. I know I take up a lot of space. I have an opinion about most things. And I have a need to make sure you know my opinion on those things. That, plus my debilitating guilt, causes me to slide right into the role of Team Member like butter on bread.

Which is why, on the first day of class, I am committed to striking just the right balance between being a loudmouth white girl and being so quiet that I’m mistaken for disinterested.

I nod to show I’m engaged, laugh when I think I should, but I make sure I’m quiet – and every passing minute of silence resonates like a personal victory.

The teacher plays a scene from a documentary called The Color of Fear. In it, a white man says he grew up in an area that didn’t have racism. He doesn’t understand why everybody can’t just get along. He grew up right along Native Americans and some of them are his closest friends.

The teacher wants to know our thoughts about the white man.

He wants us to contribute, not just expect others to do the talking. He reminds us that this isn’t TV. We’re not spectators. We’re in a classroom, albeit a virtual one. Tells us he wants to see some hands raised to engage in the tough discussion we’re having, which is how I find myself pressing that fucking button to raise my hand – because the only thing that rivals my white guilt is my fear of not being a good student.

The students who go before me make all the mistakes he cautioned us against at the beginning of class, underscoring how deeply ingrained the liberal reflex to dodge our similarities to less woke whites is. They say things like, “It took me a while to stop acting like him,” or “I used to think that until…,” prompting our teacher to point out their desire to distance themselves from other white people, as though they’ve reached some end-point and are now evolved.

When he calls my name I feel my heart jump into my throat in a way it hasn’t since PhD school.

I have the advantage of being one of the last to go – having watched my white peers step on racial minefields – so I’m careful to use different words.

Mostly, I just lead with my white guilt and say, Watching that white guy was painful because I see myself in him. Because I was him. I am him. Just to a lesser degree. I’m the newly converted so I want to point a finger and say what a piece of shit he is. He’s one of the bad ones. But I’m here because I probably am too.”

In the silence that follows, I brace for what’s coming.

I count seconds. Two, three, and then he says, “I wanna say that you’re here because the same bad thing that was done to him was done to you – hopefully to a lesser degree. Nobody asked for this conditioning. And I won’t let anybody beat themselves up or own the violence of our racialized socialization as if it’s some kind of personal property. I understand that wokeness culture says that you have to own your shit, but it was done to you. You didn’t consent. You didn’t ask for it. And you didn’t say it was OK.”

He draws an analogy to illustrate the power of societal conditioning by saying that as a young person he disavowed patriarchy only to find as an adult it had made its way into him.

It’s not what I expect to hear and I find myself wondering if I provoked a kind of coddling that people with white guilt can evoke from POC, which gets me thinking about the whole concept of white guilt.

If I can potentially provoke a stranger to coddle me, to sooth the guilt I feel as a white person, what do I provoke in my non-white friends who love me? In my non- white clients? In my non-white colleagues?

Am I really creating the space they need to express themselves or am I setting up a dynamic where they’re inclined to keep quiet for fear of triggering MY stuff?

Which is when it occurs to me that feeling guilty about being white – and all the privilege that goes along with it – is useless. It threatens to paralyze me, to mute my friends, my clients and any POC I come in contact with, because really, who the fuck wants to hear about a white girl’s guilt?

It seems to me that there’s a tipping point to woke culture: Wake the fuck up. Then do something. Steeping in how awful the inequities are between whites and non-whites without tipping onto the other side risks that I’ll fall into a coma of white-guilt.

And this realization – it’s freeing. I DON’T HAVE TO FEEL GUILTY OR HIDE MY HEAD IN SHAME ABOUT BEING WHITE. Because I didn’t ask for it. Any more than POC asked to be born their race.

But I do have an obligation to do something with my privilege. And I find that I have a lot more motivation now that less energy is being sucked down a drain of guilt and shame.

But this topic is tricky. It’s forcing me to rethink how I do things – even how I write in my blog.

Because I’m white, and who the hell am I to tell you what you should do to further your racial justice journey? A white person should probably not guide you on how to fight systemic racism. Which made me want to hit up my non-white friends for advice… But I always do that. And it’s a burden that they shouldn’t have to carry. It is not their responsibility to educate their white friends. It’s my burden.

Which leaves me in this area of vagueness, sans takeaway.

Maybe the takeaway should come from you. And maybe it’s less of a takeaway. Maybe it’s more of a dialogue.

So let me ask you: What are you doing, or what do you need to do, to fight systemic racism? I’ll open comments for this. Share your thoughts below.

PS: Here’s a link to the course I took, in case you’re interested.

← The 5 worst things to say to a friend going through a breakupWhy do my partners keep trying to change me? →
×