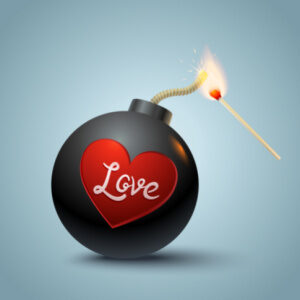 In your defense, it’s not like you were given the option to take Relationship Skills in high school and you chose to bypass it for Geography, though we’re probably in agreement that the former would have been far more useful than the latter.

Which leaves you two ways to learn the most important skills you need in life:

2. Learn from your parents.

It’s a setup for failure, my friend. And it’s no more your fault than whether the family and culture you were born into had a clue about how to raise you.

But you’re an adult now. And it’s incumbent upon you to fill in the gaps and root out the rot that others left in you.

What follows is a list of the top 5 things people do to fuck up their intimate relationships – and solutions, of course.

At least that’s the story you tell yourself when you drop hints instead of directly telling your partner what you want and need. When they fail to deliver, you repeat the exact same language as though their issue is an auditory one and not, say, the way you express yourself.

Solution: Say it another way. Write out how you’ve phrased it in the past. Then rewrite it as though you were trying to explain it to someone who is not in your relationship. Verbalize the re-write to your partner. If that doesn’t work, do it again. Repeat this exercise until you get the desired response.

2. You blame your partner.

Most people reflexively look outward to explain their feelings. Why we feel and act a certain way is never simple and you’ll rarely have access to all the reasons because most of our shit is unconscious. If you have a habit of leading with external explanations rather than the more nuanced, internal ones, it provokes defensiveness in your partner which makes them unlikely to hear you in a compassionate way and even less likely to meet your needs.

Solution: Before you explain why you act or feel a certain way, take 5 minutes (yeah, this requires impulse control) to write out all the reasons why you feel the way you do. Start with what your partner did or didn’t do. Then dig deeper, and ask yourself what about your history makes you vulnerable/sensitive to this type of feeling or dynamic. Now, re-order your list and start with your history when you speak to your partner. You’ll see how this lowers their defensiveness and increases the likelihood that they’ll show up the way you need them to.

3. You love them the way you want to be loved.

Not the way they need to be loved. Everyone’s heard of Love languages by now. There are 5:
• Words (words of affirmation)
• Behaviors (acts of service).
• Gifts (gifts).
• Touch (touch).
• Time (quality time).

Most of us have several love languages that speak to us, but we all have a few primary ones that we respond the strongest to.

Solution: Ask your partner to take this quiz and to send you their results. Then schedule some time with them and ask them to give you specific examples of their top 3 love languages. Then, express your love in those ways.

No one likes it. I abhor it. Which people find surprising. I suppose because most people believe that direct communication (my style of choice) provokes it. The thing is, it absolutely does not provoke conflict. It bypasses it. Indirect communication is more likely to cause it. Because people know when you’re bullshitting them. Most of us can smell it. And that’s the thing that pisses us off: It implies that you don’t trust us to handle the truth appropriately. You either think we’ll overreact (which makes us feel crazy) or it tells us that you don’t know us well enough to know what will upset us.

If you successfully avoid conflict, you and your partner will fail to learn a critically important relationship skill called ‘repair.’

Repair is how we make up following a disagreement. And the way you repair predicts the outcome of your relationship with greater accuracy than the frequency with which you fight.

Ultimately, you never test the strength of the relationship to see if it can withstand disagreement when you channel all your energy avoiding them.

Solution: Start small. Express an opinion that you’re pretty sure is different from your partner’s. Notice how they respond. Notice that you survive as a couple. Increase the stakes incrementally until you’re able to be an individual who is not a mirror image of your partner. You don’t want to be Melania, do you?

Growing up, I dated boys who were part of a machismo culture and they expressed their feelings through jealousy. It wasn’t just the way they were in intimate relationships: They were protective of their younger sisters in ways that my brothers weren’t of me, often threatening other boys who showed an interest in them.

What I noticed was that they paid attention to the people they were closest to – often expressed through possessiveness – that simply wasn’t part of the family I was raised in.

As a kid who grew up feeling invisible, that level of attention felt like a perfect salve to me. But the first time I got slapped across the face was the last time I tolerated it in a relationship, having seen where it could lead.

Solution: Like most relationship issues, jealousy is not a ‘partner’ problem. It’s a YOU problem. That’s the good news. Because if it’s a you problem, you can fix it.

Start by taking my quiz to see where you fall on the jealousy spectrum. You’ll then get access to a bunch of tools that are customized for you, based on your needs.

Bottom line: There’s no cavalry coming in to save you. Though I could argue that you’ve got a Lesbian New Yorker in your back pocket offering everything you need to know to change the course of your life as it pertains to this topic, so maybe there is a hero, or heroine, at your disposal.

The question is, what will you do with it?

“Toughen Up,” They Told Me…

How To Master The First Kiss