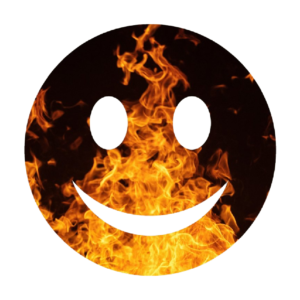 No matter how many times I catch myself – no matter how clear I am that doing it does not give me the outcome I want – when I hear my wife Steph express words that don’t spit glitter, I react with some version of, it’s really not that big of a deal.

Aside from our personal experiences which confirm almost without exception that this type of remark leads us down a rabbit hole of negativity, I’m a trained therapist. A veteran, by most standards.

I know better. And I know why it lands on her the way it does.

Why I do it has very little to do with her. Like most of how I go through life, It’s about me.

I’m trying to calm myself. To regulate my own nervous system.

Stephs’ a verbal processor [her words]. She says out loud the words and thoughts I’ve spent decades learning to compartmentalize, tuck neatly away in a corner of my mind so I can focus on whatever’s right in front of me.

I react the way I do because I want her to stop expressing my fears.

The last time she groaned, This thing I have to do is going to take me 3 hours, I tried to be mindful, carefully crafting my words and offering up, the last time you did it, it actually took 2 hours and 43 minutes – a fact that was intended to make her feel better – it had the opposite effect of what I wanted, because now on top of dreading the 3-hour task [I won’t repeat that it really wasn’t 3-hours], she’s left feeling like she shouldn’t feel dread, or  maybe she also felt annoyed because like her, it turns out I can’t shut up either.

There’s a term for this. It’s called brightsiding (“Look on the bright side”).

In the extreme, it’s Toxic Positivity: An assumption that the only emotions that are OK to express are the positive ones, which is caused when our environment, the voice inside our head, or both, provoke us to suppress our negative emotions.

Suppressing emotions is not a great idea. For starters, it essentially ensures that the negative emotion will hang around longer. And it can lead to depression, anxiety, and / or PTSD. There’s no getting away from it: you gotta feel it to heal it.

I don’t want Steph to suppress her feelings. I just want her to feel a little less shitty than she tends to feel. Something like a 60/40 positive-to-negative ratio. Or maybe 70/30, which may seem like I’m asking a lot, but it’s a hell of a lot better than Gottman’s 5-1 ratio (for every 1 negative interaction, a couple needs 5 positive or neutral interactions, ideally) – which I just realized may in and of itself be brightsiding, since saying things like “It could be worse” is also considered brightsighting.

I want Steph to see things a little less bleakly so she’ll feel better – but also because I don’t want to be around an unhappy person. Especially during COVID when she’s the only human I am around.

Which brings up a point: The pandemic is having an interesting impact on brightsiding. In the beginning, there was tons of pressure to make the most of lockdown: Learn a new language, write a book, develop a new skill, become a gourmet chef, start a company. Just writing that exhausted me.

But as the months have turned into a year, the pandemic has had a recalibrating effect on brightsiding. I don’t know about you, but when someone asks me how I’m doing, they better brace for honesty. Gone are the days when I would muster up a socially appropriate smile and deliver the expected response.

So maybe where I land is that, ideally, we shoot for the sweet spot between recognizing that there’s danger in overemphasizing the positive, and tempering our bitching, since most of us are doing our best to stave off an existential crisis.

Do’s And Don’ts of The First Date

Why Love Is Actually Irrelevant to the Success of Your Relationship

I Cheated: What Do I Do?

Is My Therapist Really Hitting On Me?

In a relationship rut? These 5 things fix it.