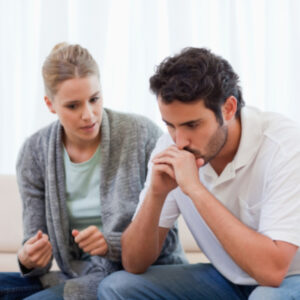 Admit it: The term we have to talk sends a little shiver up your spine. It’s probably one of the most universally dreaded statements. I’m not sure if it’s worse to be on the receiving or giving end, but for today’s purpose, I’m going to teach you how to be on the giving end (without ever uttering that sentence).

Conflict and bad feelings only get worse when we avoid dealing with them. We tend to avoid difficult conversations for fear of the outcome. We don’t want things to get worse, we don’t believe the other person will change, we don’t have the time or it’s just not the right time.  The excuses are endless. And they stop here.

So grab your balls, your ovaries, or your equivalent thereof and commit today to building some emotional muscles by learning this life skill. Below is a step-by-step guide on how to get to the other side of a difficult conversation.

← The Strain Of Infertility On RelationshipsWhy Your Apology Is Bull$shi! To Me →
×

For Better Or For Worse

Things We Can Learn From Johnny Depp

Why Your Apology Is Bull$shi! To Me

This Is How To Have A Tough Conversation