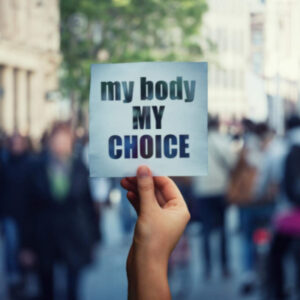 The fourth time I had an abortion… Well, maybe I should start from the beginning.

I was seventeen when I had my first abortion.

It was the year I decided I wanted to go to college, just months after the cause of my childhood angst — my mother’s rageful husband — unexpectedly died. With his death came a wave of peace that washed over my family, enabling me to wrestle loose from an adolescent rebellion that nearly destroyed my future.

Clear-headed for the first time in years, I made a decision to focus. To try and salvage my deplorable GPA. To quit drugs. And alcohol. To stop getting in trouble. To get a boyfriend.

I was on the pill and, probably because I took those pills so sporadically, I found myself pregnant my senior year of high school, still awaiting all the college rejection letters that would come.

He was my first real boyfriend, nineteen years old. The decision to abort was mutual. We were so aligned that it was barely a discussion.

Four years later — because apparently I hadn’t learned my lesson — I found myself pregnant again at age twenty. This time I’d stopped taking the pill entirely. I don’t know what I was thinking. And I realize as I write this that in all my years of therapy (as a patient), no shrink ever asked about it or whether I’d processed it.

The decision to abort this time was a heavier one. I was riddled with guilt and shame. Afterall, I was no longer a kid. I should have known better. That last part is true.

He was my second boyfriend, just twenty-three years old. We thought about having it. He had a brother just a few years older, married, who had a baby and seemed to be managing OK.

But I was in college, which was nothing short of a miracle, and as much as we all loved my boyfriend, my family wasn’t going to support me doing anything that would derail my graduation.

My third abortion, like my first two, was unplanned.

I had just entered my second trimester when I started spotting. A trip to the ER confirmed to my then husband and me that the fetus I was carrying had no heartbeat. It had stopped developing in the first trimester. This time they called it a D and C. Same procedure. Nicer facility.

A decade later, I had my fourth abortion.

My wife Steph and I made the decision to have kids. I got pregnant on the fourth try — not bad for a forty-two year old. Everything was rolling smoothly until we got the results from the genetic test they give pregnant ladies who want to rule out chromosomal abnormalities, somewhere between weeks ten and twelve.

Our results were not good. And I was in my second trimester. It was the worst of all my terminations.

In the wake of Roe v Wade, I want to draw you a diagram of what my life would look like if I hadn’t had the right to choose the medical care that I needed — four diagrams, each uniquely derailing me from the life I have today — from spending almost three decades working with thousands of patients who needed the version of me they got because I had the right to choose.

In the first diagram, you’d see me derailed from completing high school.

The second would have derailed me from graduating college, then from getting my Master’s degree at Columbia University. And ultimately from earning my PhD at NYU.

The third diagram…I don’t even know what it would show.

I suppose you’d see me having to carry a dead fetus to term or until my body expelled it, at which point, I suppose I’d be susceptible to sepsis?

In the final diagram, you’d see me forced to give birth to a child with two genetic disorders, both of which usually result in infant fatality within the first year of life. During that year, the baby essentially lives in the hospital, as do the parents, until it’s time for the baby’s funeral. Then, the parents, who are no longer parents, are expected to reconnect as a couple in a way they haven’t since the 12th week of pregnancy.

I imagine I would have walked away from that experience more broken than reality left me.

I probably wouldn’t have had the emotional, physical or financial bandwidth to adopt my daughter when, four years later, she found herself without family at age 20, which in turn would have made her more likely to follow the statistics that predict 90+% of young adults without parents wind up in prison or homeless.

I’m not telling you this because I think I should be congratulated. I’ve made asinine decisions in my life, like not using birth control consistently when I wasn’t prepared to have children.

I’m telling you this because unless you’re a Gen Xer, you may not be too concerned about what’s happened because you probably don’t know too many people who’ve needed surgical abortions, or abortions at all. There’s a reason for that:

Plan B became available in the 2000’s. It significantly lowered surgical abortion rates, regardless of what the right says. Look it up yourself.

Now that Roe v Wade is a thing of the past, you need to know that Plan B is next. Which, ironically, is going to make the need for abortion even greater, like it was when I was growing up.

All of which really pisses me off, if I’m to be honest.

I don’t understand a country that values the right to carry a gun over a woman’s right to make her own reproductive choices.

I don’t understand the hypocrisy of calling oneself Pro-Life while refusing to fund childcare so that single mothers can go to work to support the child they were forced to give birth to.

I don’t understand not automatically garnishing the wages of fathers to pay for the children they sired. I don’t understand making that the job of the mother. Of forcing her to fund litigation, which might result in a judgment, but good luck ever collecting that money.

I don’t understand not funding universal healthcare so pregnant women can get the medical care they need early on to ensure that the child they’re being forced to carry is born healthy and that the mother doesn’t die during childbirth.

I call bullshit on declaring yourself Pro-Life if your empathy runs dry at the point of birth.

And also, fuck you. This is not over.

How To Make It Through The First Three Dates

What Dreams About Cheating Actually Mean

9 Signs You Are About To Be Ghosted

The Story Of My Fourth Abortion