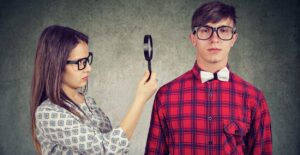 Everyone wants their partner to change.

“Why can’t he be more romantic?”

“If only we had more sex [hotter sex; less sex; any sex], I’d have no complaints.”

“I just want her to make me a priority.”

In my (gasp) 20+ year career, the one constant among my clients is that each has believed with every fiber of her being that the key to her relationship success rested in her partner’s willingness to change.

Sometimes my client’s relationship fantasy involved a massive overhaul: He needs to be more emotionally intelligent.

Sometimes it seemed more grounded in reality: I don’t think it’s too much to want her to kiss me when she first sees me.

But, always, the source to her happiness lay in a future version of her partner.

I spent years wishing that my wife, Steph, would become my vision of who she should be.

It’s not that I didn’t like who she was. I picked her, after all.

It’s that I saw potential in her.

I saw who she could be.

Locked in the vantage point of the dirty lens through which I saw her, I couldn’t understand why she wasn’t flattered by this.

I mean, I’m a professional problem solver. People pay me a lot of money for the very opinions that I was offering Steph – sans bill.

I vaguely understood that it wasn’t a great idea for one partner to try and change the other. And my workaround for that concept was to outsource those tasks to service providers – which I did for roughly 2 years while we were dating.

Here is an incomplete list of the people I hired to help change Steph, along with the outcome:

The Etiquette Coach. Steph’s parents divorced when she was 12-years old and from that point forward she lived alone with her father who worked long hours in corporate America. Knowing that Steph had never been taught the things that moms are known for teaching their kids, especially girls, I thought she’d be happy when that I hired the etiquette coach.

That’s pretty much what happened.

The ADHD Coach. Steph and I are the poster children for ADHD. The difference between us is that, for a hot minute in my career, I carved out a mini specialization working with clients who had ADHD. The result is that I have behavioral management techniques at my disposal to help me compensate for my ADHD which Steph did not have.

To help Steph catch up to me, I hired her an ADHD coach.

The ADD lady told Steph that she and I would eventually find her ADHD behaviors funny and endearing – a prediction that did not come to fruition while the ADD lady coached her – primarily because underscoring everything Steph did wrong resulted in less improvement in Steph’s ADHD behaviors and more misery for her, and because the absence of immediate change in my girlfriend made me resentful of the poor ROI I was getting. I wasn’t sure who I was more annoyed at: Steph, or the ADHD Coach for sucking.

The Organizational Expert. A byproduct of having unmanaged ADHD is that you tend to be a disorganized paper hoarder who has great difficulty keeping your home and work environments clean-looking. I am a Type-A Virgo who lives in a city where having one too many business cards can constitute the beginning of a slippery slope into clutter.

Enter the organizational expert, whom we called, The OCD Lady. Once a week, she’d come to our apartment and create filing folders and other systems, none of which Steph ever used.

By now, Steph’s mounting resentment was a constant tension between us. Instead of appreciating my willingness to solve so many of her problems, she’d grown increasingly bitter over time – as had I over her failure to change.

The Couple’s Therapist (the 2nd one).

The last service provider I dragged Steph to was a couples therapist.

In the first session, the couples therapist informed me that farming Steph out to other professionals still constituted me trying to fix my girlfriend. And she wanted me to stop.

I’m going to tell you right now that I didn’t like the couples therapist or her stupid advice.

So when Steph got up to go to the bathroom, I leaned forward and whispered to the therapist, “Do you honestly think I’m wrong and that it’s OK that my live-in girlfriend…?”

Here my memory fails me. I’m sure I blurted out one of my go-to Steph complaints that I felt was indisputable.

The nasty therapist raised her eyebrow and said, “Not at all, Darcy. I think your feelings are entirely understandable.”

“So why is it on me to accept [whatever the fuck my complaint was]?”

“How’s trying to change Steph been working for you?”

This made my jaw clench, but before I could say something mean, Steph walked back in and the therapist said, “Girls,”

I know it’s inappropriate to call two grown women ’girls’ but I find something disarming about that term.

Anyway, she said, “Girls, I think we can all agree that the dynamic between you is toxic. My suggestion is for you, Darcy, to stop hoping Steph will change, to accept her as-is, and if you can love her as the person she is, you have a chance. If not, you’ll know soon enough and you can always break up then.”

This is already turning into an epically long story, so I’m going to skip to the end:

I stopped imposing change on Steph.

I began taking 100% responsibility for both the relationship and for my needs in general.

What I didn’t expect was that when I stopped criticizing Steph, I felt better.

Apparently, my pattern of constantly looking for ways to improve Steph had been making me feel like shit. And it trained my brain to hunt for Steph’s weaknesses, which did little to enhance my happiness.

In the absence of complaining, I found that I had more energy to tell Steph about my day, to ask her about hers, and to connect with her.

All of this resulted in a compound effect which dramatically increased my overall satisfaction in my relationship (and that doesn’t even touch on how my not being a bitch affected Steph, but that’s her story to tell).

And then something paradoxical happened:

Her paper trail (literally, a paper trail), which used to begin at the front door and would disperse both vertically and horizontally from there – suddenly began to retract. One day (months after I stopped being up her ass) I noticed it had become reduced to our home office.

And ironically, by the time she started to change, I really didn’t need her to anymore. I don’t mean that in the it’s too little too late kind of way.

What I mean is that I genuinely began to feel better when I broke the cycle of expecting Steph to change, only to become resentful when that change didn’t manifest.

Which meant that the changes Steph began to make were of her own free will. They weren’t because of me. Which also meant that they were sustainable.

And so, what I learned – what the takeaway was – is this:

The way to fix the person you love…. is by fixing yourself.